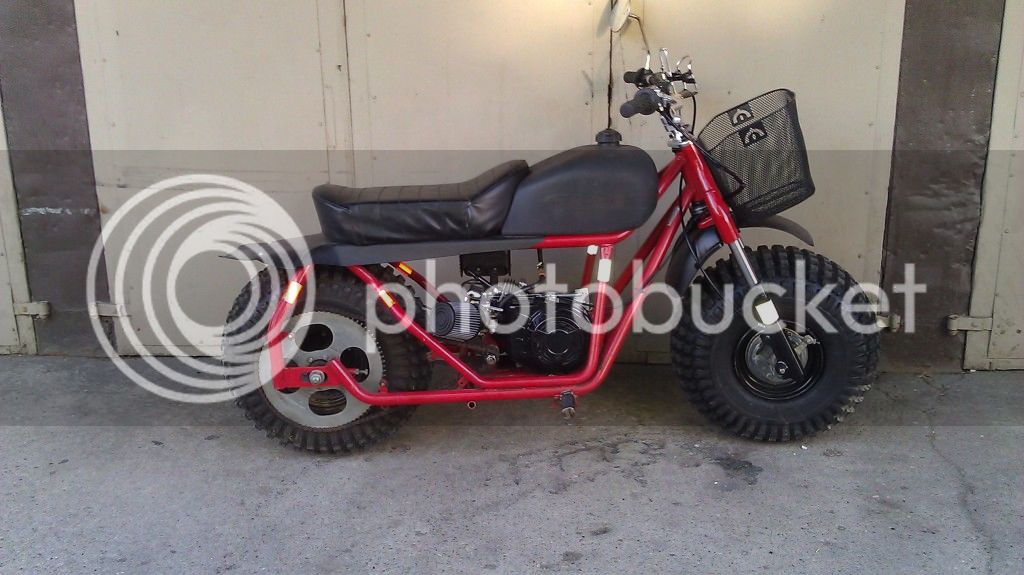 MANCO FAT CAT
Code name " the Beerrunner"
Honda ATC front end, Clone 6.5 with a Stage 1 hop up kit.
If you can keep the front end down it will go anywhere #36
As I showed in the What Is It? post, I bought a pile that looked like a Pak Jak from the crappy pics. I say crappy because I want to blame the pics instead of looking harder at it before I bought it. :laugh:

Now that I have it here, I believe it was a Pak Jak at one time, but somehow the frame got lost in the translation to what it is today.

I was going to start a Project Log on this bike, but I am wanting to wait for if we have a Build Off next year.

As such, I want to talk about it and get some ideas on where to take this. Front fender is not orig. Dunno what it came from, but I kinda like the look, just not on this bike.

This is what I am starting with:

I started looking at the below pic from the OMB gallery and other Pak Jaks there and then took a harder look at the above pile.

From the ad above, they used 1 3/16" tube for the frame/forks. The forks on the pile have 1 3/16 uprights and crosstube. Someone cut off the right handlebar and shoved 1" in there for a standard throttle. Handlebar width and height are right.

Then we get to the "frame". Someone had a lot of 3/4" conduit laying around... Dimensions are close to those in the ad above, mostly due to the different tube size.

Jackshaft assembly looks right and has the correct band brake on the first jackshaft. One thing wrong is the centrifugal clutch instead of the Salisbury. Motor is an H60, someone tells me what the year is..

Notice the fuel pump mount cast into the block here:

You can just see the band brake on the left of the above photo. It looks like a standard band, but has V belt glued to it and rides in a pulley. Weird but a good way to get more surface area and better grip.

On to the rear, the rear rim I am thinking is wrong. Does not have spokes... It looks like a standard car rim. The bad part is the rim is welded to the hub through the lug stud holes. I think I can drill em out for real studs and a hubcap...

Orig axle mount is gone, probably with the orig frame. Tire is a little smaller than the spec in the ad above...

And a couple pics from the other side...

Footpegs are not orig, but I like the idea of them.

I am thinking(or wanting) this thing to be a Pak Jak that was wrecked or whatever and somehow someone decided to salvage the parts and built it.

Or someone wanted a Pak Jak and made it from parts. Either way, I am looking at this as a mess. I am not worried about making a real frame for it, I have worked out a lot of the dimensions just from the pics I have found. Just a lot of work.

Does my wife disapprove? Sure.

She will get over it. :laugh: